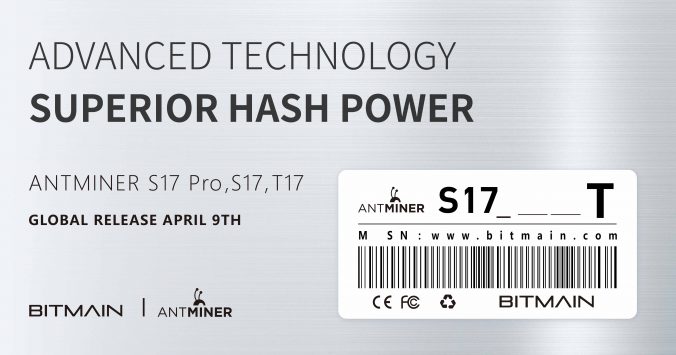 The Product Manager of Bitmain’s Antminer 17 series gives users a sneak peek into the features of the new miners which offer “steep improvement” in hashrate.

HONG KONG,  29 March 2019 – Bitmain, the world’s top 10 and China’s second largest fabless chipmaker, is putting their new energy efficient miners that mine cryptocurrencies based on the SHA256 algorithm, such as Bitcoin (BTC) and Bitcoin Cash (BCH), up for sale globally on 9 April 2019.

The key features of the Antminer S17 include: improved energy efficiency; higher hashrate and size compatibility with the previous S15 series.

Ahead of the new model release, Yangxin, Product Manager of Bitmain’s latest Antminer series, reveals what went into the production of the new and improved 2nd generation 7nm ASIC BM1397 mining chips.

“The new miner offers a steep improvement in the hashrate in terms of space and power consumption,” said Yangxin.

The new chip equipped in the 17 series offers a 28.6 percent improvement in power efficiency in comparison with Bitmain’s previous 7nm chip, the BM1391.

Yangxin has specialized in the field of IC (Integrated Circuit) design for over a decade and currently manages miner production delivery, which includes system design and mass production. Here’s what he had to share on the following:

On the highlight features of the new Antminer S17, Yangxin said:

“There are two key indicators to look for when measuring the quality of a mining machine: efficiency and the hashrate:

The stand out features of the S17 are reflected in the following:

On the improvement of the 15 series and the 17 series Yangxin said:

“Electricity bills are very high for Bitcoin mining right now so the improved energy efficiency means a significant drop in costs and, thus, increase in profits. Secondly, the new miner offers a steep improvement in the hashrate in terms of space and power consumption. This will be especially meaningful for mining farms when you consider the investment needed with set up.

On what’s next and whether there is an incentive to develop higher miners beyond 7nm chips Yangxin said:

“From a technical point of view, there is no end to the development of technology. However, in the short run, the driving force behind the development of next-gen miners beyond 7nm chips is slowing down due to physical limitations.

With the nm size shrinking quantum effects, among other new challenges, come into play. It is promising that TSMC (Taiwan Semiconductor Manufacturing Company) is already in the process of building 5nm chips. We will continue to follow the development of this technology but it is still early days.

It takes several iterations to create new miners based on the next generation semiconductor process. The solutions to the challenges of nanometer scale mass production require more investment and further research and development.

Considering the rapid pace of development in this area in the past few years, the industry would soon have to find what the next generation would be. For the near future, 7nm would remain the most preferred in terms of performance and economics.”

The new Antminer 17 series will go up for sale on Bitmain’s official website on 9 April 2019.