On Fridays, beginning today, we will be rounding up some breaking news of the past week from the bitcoin/cryptocurrency space. This past week we saw:

the Devcon2 in Shanghai

Several heavyweights from the global cryptocurrency space descended on Shanghai for the Devcon2.  Here are some informative news articles intended to give you some of the experience.

At Ethereum Mega-Event, the ‘Church of Vitalik’ Sobers Up , How Zcash ‘Project Alchemy’ connects with Ethereum , Ethereum Mist and how to build apps that are truly unstoppable , Ethereum Devs Applaud the Audience at Devcon’s Closing

a US federal judge rule that Bitcoin is a currency

Anthony Murgio, of Coin.mx, who was indicted on alleged money laundering charges in July of last year, had sought to dismiss two of the charges against him in part by arguing that bitcoins don’t count as “funds” in the context of US law. This was rejected by the judge Alison Nathan, who wrote in her ruling that: “Bitcoins are funds within the plain meaning of that term. Bitcoins can be accepted as a payment for goods and services or bought directly from an exchange with a bank account. They therefore function as pecuniary resources and are used as a medium of exchange and a means of payment.”  Read more…

Bitcoin.com’s new mining pool, which uses the Bitcoin Unlimited protocol, mined its first block. Bitcoin Unlimited is an alternative protocol that removes transaction block size limits from the protocol level and adds it to the transport level. This means those running the software can choose the size they like. Read more… 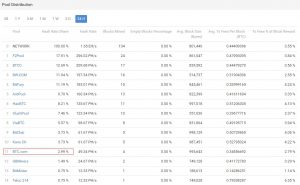 The new open-source pool by BTC.com a place on the list of the top ten mining pools. According to pool distribution statistics from BTC.COM’s free block explorer and statistics website, BTC.COM’s new pool, at time of writing, accounted for 2.9% of the bitcoin network’s hashrate. Read more…