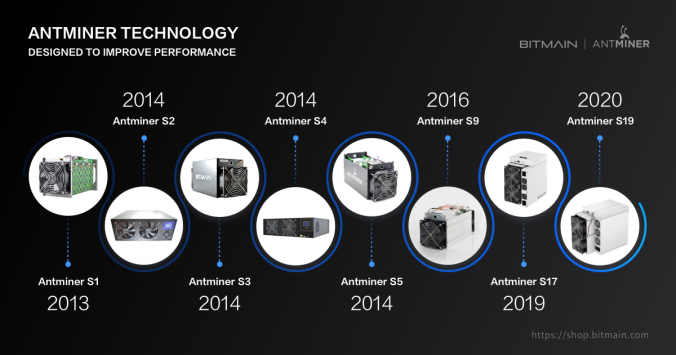 The story behind the ASIC evolution

When Bitcoin mining first started in 2009, it was considered a niche hobby for cryptocurrency enthusiasts. Since then, it’s grown into a billion-dollar industry – with Bitmain leading this growth since 2013.

Bitmain’s entrance into the mining market in 2013 saw the emergence of the ‘ASIC era’, as the company sought to bring ASICs to the masses. Specifically designed to mine cryptocurrencies, the demand for ASICs has since continued to grow alongside the advancement of the bitcoin mining industry.

Back in 2009, the only hardware needed to mine Bitcoin was a simple home computer (provided it had reasonable specifications). These computers would run standard multi-core CPUs, which would produce BTC at a rate of 50 per block. This would equate to a few dollars of profit per day.

These demands first accelerated in October 2010, when the code for mining bitcoin with GPUs was released to the general public. Although the public was able to mine bitcoin for themselves, it quickly became evident that it was still not easy for GPU users to scale hash rates. So, it was only once FPGAs were introduced that mining really began to scale, as FPGAs are more power-efficient than GPUs.

By 2012, the mining industry was advanced even further with the adoption of ASIC technology. These miners were carefully designed for the specific use of mining cryptocurrencies, replacing the need to tweak the field-programmable component of FPGAs after purchase. As there will always be a need and approach to making a specific computation more efficient, ASICs were a natural progression in the Bitcoin mining industry.

Bitmain’s ASICs were quickly getting more powerful, and more energy-efficient over time.

Over the next few years between 2014 and 2019, Bitmain released numerous Antminer models to the market. In 2014 alone, Bitmain released miners such as the Antminer S2, S3, S4, and S5 – all with the aim of providing more efficient and profitable hardware to miners in order to keep up with the demands of the growing bitcoin mining industry.

On top of this, Bitmain launched the AntPool mining pool in 2014, further highlighting Bitmain’s commitment to helping decentralize the bitcoin network and put the majority of hashing power into the hands of consumers. This commitment was further highlighted in Bitmain’s 2015 launch of BTC.com, which introduced the top-leading blockchain explorer that efficiently offered users all information on the network. By 2016, BTC.com also launched its own pool platform.

With BTC making its historic price run in 2017, Bitmain continued to release batch variations of the S9 as well as entirely new models, such as the Antminer T9 which had a hash rate of 11.5 TH/s.

As the Bitcoin market continued to grow, Bitmain released 8 SHA256 models throughout 2018.

As the Bitcoin market continued to grow, Bitmain released the Antminer S15 in 2018, which was launched at the World Digital Mining Summit. The Antminer S15 provided long-term energy efficiency through its use of Bitmain’s 7nm chip that integrates over 1 billion transistors per unit.

By 2019, Bitmain had introduced its most popular Antminer models to date: the Antminer 17 Series.

Antminers and the future of mining …

Since 2013, Bitmain has shown commitment to developing new technologies that overcome the new challenges of mining – and the significance of Bitmain’s advancements makes them leaders by example in the field.

Today, Bitmain continues to pursue its vision of bringing the future of mining to all. And that is why Bitmain has released the Antminer S19 and Antminer S19 Pro models, featuring hash rates of 95 TH/s and 110 TH/s respectively. The Antminer S19 series represents the evolution of Bitcoin mining, from the very first Antminer S1 to the ever-popular Antminer S9, reaching the present-day Antminer S19. The mining community has taken great leaps of development.